Posing in his studio in Mill Valley, California, c. 1928.

Tilden Daken (also known as Tilden Dakin; see Signature Styles) is known as a California Impressionist, belonging to the second generation of artists in the American West who painted in Northern and Southern California during the first three decades of the twentieth century. Mostly self-taught, his style is rooted in the genres of Realism, Academic Art, Barbizon, Tonalism, and American Impressionism. He painted en plein air, directly from nature to capture the atmospheric light of the day and dark of night. Though he painted from coast to coast, he is best known for his oil paintings of the California redwoods, the Sierra Nevada Mountains, Sonoma County’s Valley of the Moon, Marin County’s Mount Tamalpais, Southern California’s sunrises and sunsets, and the scenery in dozens of state and national parks. He also painted in Alaska, the Pacific Northwest, Hawaii, Mexico, Baja, the South Seas, and parts of the East Coast. Unique to any painter of his day, he also captured scenes beneath the sea in a custom-built diving bell. Historians say he painted more than 4000 works. His paintings are held by at least eight museums, he is referenced in more than two-dozen books, and he was captured on film by Hollywood directors. In the 1920s, he published autobiographical short stories describing some of his most celebrated adventures: “Experiences in the Rugged West” and “In the Grip of an Octopus.” 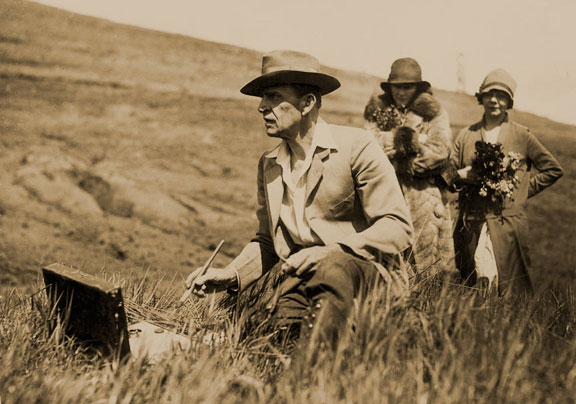 Tilden Daken painting in a field near Bootjack, CA in 1931. Admirers are his second wife, Florence (right), and her sister Cora. 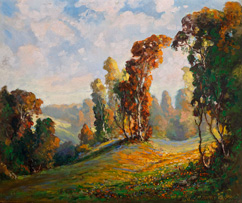 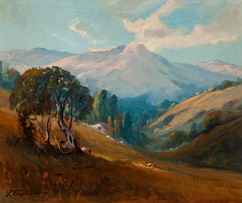 In the Valley of the Moon, Mount Sonoma in Distance 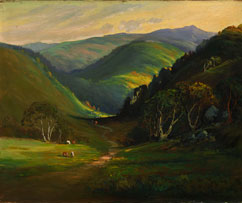 On the Trail to Big Lagoon, Mount Tamalpais 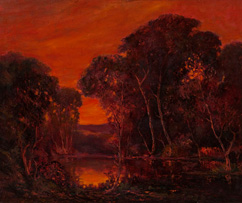 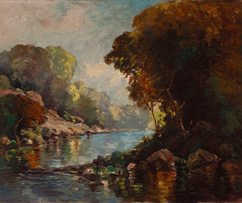 On the Bank of a River, Sonoma County

A Life of Legend

Art historians say no plein air artist went to greater extremes to capture the rugged wilderness of the American West on canvas.

He painted in more than two dozen national and state preserves, including Tahoe National Forest, Yosemite National Park, and Kings Canyon National Park. He became known as the “Official Painter of the National Parks of the United States.”

Hal Roach, American film and television producer, director, and actor known for producing the “Laurel and Hardy” and “Our Gang” film comedy series;

William Keith, Tilden’s mentor and a friend of John Muir’s, Keith was a Scottish-American painter famous for his California landscapes.