A Chronology of Tilden Daken’s Life

From Illinois to the Gold Country (1876—1902). Samuel Tilden Daken was born in Bunker Hill, Illinois, on June 14, 1876. His family moved to Sacramento, California, when he was three years old. In his youth he mined for gold in the Sierra foothills and developed an interest in interior design and fresco work. By his teens he was painting murals in the homes of San Francisco’s high society (most were destroyed in the 1906 earthquake and fire). In 1901, in the rail yard station in Reno, Tilden met a young writer named Jack London, and together they rode the brake beams of a freight car over Donner Pass to Oakland.

Early San Francisco years (1903—1906). Tilden married dressmaker Mary Elizabeth Duplissea in San Francisco in 1903. In 1906, the couple’s Mission Street home and the artist’s studio on Van Ness Avenue  were destroyed in the earthquake and fire. In the aftermath, the Dakens and thousands of other refugees lived in “Tent City” in Golden Gate Park.

Sonoma County years (1906—1912). Following the earthquake, the Dakens moved 50 miles north to the town of Glen Ellen in Sonoma County, where their daughters, Edith and Sydney, were born in 1907 and 1908. Tilden resumed his friendship with Jack London, gained recognition as the “Painter of the Valley of the Moon,” and developed a passion for painting in the California redwoods. In early 1909, the family moved to Santa Rosa, a Sonoma County town that thrived following post-earthquake reconstruction. There Tilden opened a studio, taught art classes at Ursuline College, and attempted to launch the “Daken Art Institute.”

Return to San Francisco (1912—1913). After six years in Sonoma County, the Daken family returned to San Francisco in early 1912. Tilden opened a studio on Gough Street and held exhibitions.

Mexican Revolution (1913—1914). In 1913, Tilden left his family and moved to Mazatlan. While planning an exhibit for the 1915 Panama-Pacific International Exposition, he was wounded and held a prisoner of war under Carranza’s rule.

The Submarine Studio diving bell (1915—1926). In late 1915, Tilden traveled to the Hawaiian Islands where he experimented with painting underwater ocean scenes. After near-death experiences swimming with sharks, he built a custom-designed diving bell he called the Submarine Studio. He is said to have painted 300 underwater scenes. In 1926, published “In the Grip of an Octopus,” a short story about his experiences with sharks and a giant octopus. His Short Stories

The Northern California Alps and the winter of 1922. Tilden battled deep snow and frigid temperatures while painting for months in the Sierra Nevada and later exhibited a series of 100 works known as the “Northern California Alps”collection — arguably the artist’s greatest legacy. In 1928, he published “Experiences in the Rugged West” chronicling an eight-week journey into the high country. His Short Stories

Hollywood years (1923—1925). In early 1923, Tilden moved to Hollywood, hobnobbed with celebrities, and painted portraits of silent film stars. That year, he set sail for New Guinea on a mission to paint the headhunters. A classical music aficionado, Tilden displayed a neurological condition known as synethesia. He painted to orchestral music in a red palette and coined the phrase “key of red,” derived from the notion of musical keys.

Marin County years (1925—1930). Tilden returned to Northern California, settled in Marin County, and built an enchanting home in the town of Mill Valley.  A photograph of the Cascade Canyon home is featured on Wikipedia’s  Mill Valley history page. Having divorced his first wife in 1918, he remarried during his Mill Valley years. He resumed teaching art classes and painted hundreds of landscapes in Marin County, including scenes of Mount Tamalpais, Muir Woods, Tiburon, and Point Reyes.

The Great Depression, a cross-country tour, and return to the Gold Country (1930—1935). In early 1930, Tilden and his second wife left Mill Valley and embarked on a cross-country tour. The artist exhibited that year in Chicago, Cincinnati, and New York City. In 1931, the Dakens spent nine months in a mining camp near Yosemite. In 1932, they settled in Georgetown, the historic Gold Rush town in El Dorado County. In early 1935, Tilden was diagnosed with cancer and died on April 24, 1935. He is buried in the Georgetown Pioneer Cemetery. His works have been exhibited often since his death. Exhibitions 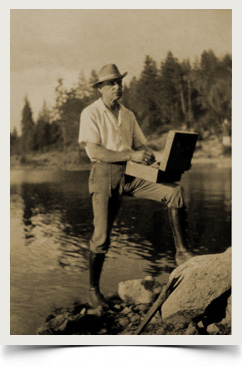 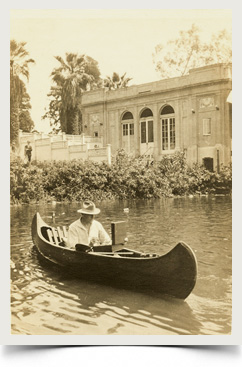