Illustration by J. Normand Lynd from Tilden Daken's "In the Grip of an Octopus" as featured in Los Angeles Times, March 27, 1927

From “Experiences in the Rugged West”

As featured in a San Francisco magazine, The Wasp, December 1928 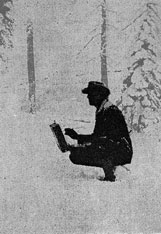 I would have been well content if I had plenty of one thing—artists’ material, so that I might paint. My one thought was that I was losing time at my art, but I had nothing but pencil and sketch pads, which I thanked God for. I also thanked Him for the fish, as I knew that I would not starve. So for eight weeks before the cold weather came I lived on these trout. Nothing else. Only fish. Cooked over a campfire on a steel rod turned by a little water wheel that I made out of a can. Then the weather turned cold and froze the deep snow. I struck out one morning at day-light with my gun, fishing rod and two days’ food rations which I had saved for this break. . . .

. . . I heard a cracking noise, and looking up it seemed that the great mountain towering in front of me was coming at me. I jumped to my feet and rushed from it. Made straight for a heavy growth of timber, which I felt would be my friend and which it proved to be. The snow slide stopped after it had penetrated the forest two hundred feet. As I looked back after the crash was over, there was a bank of snow about one hundred and fifty feet high, with my entire outfit under it—gun, rod and remainder of my rations.

From “In the Grip of an Octopus”

A short story by Tilden Dakin as told to Harry H. Dunn
Syndicated in newspapers across the U.S. and in Canada and featured in Wide World Magazine, May 1926–Illustrations by Tom Peddie 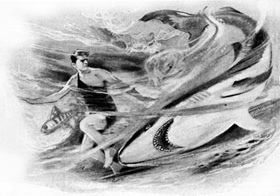 It was off one of the Channel Islands, on the coast of Southern California, that I had an experience with sharks that made me begin to doubt the protective capacity of my steel box. I was working in some twenty fathoms of water (a hundred and twenty feet) where something struck the corner of the diving-bell and then glanced off. The force of the blow was enough to rock me on my stool and upset my tubes of paint, and it brought me suddenly to my feet, whereupon I bumped my head on the low roof, which in the excitement of the moment I had forgotten. My first thought was of a submarine earthquake and my second that a boulder had fallen from one of the high, overhanging cliffs. My third guess hit the real target, for just then the largest man-eating shark I have ever seen passed within a foot of the window directly in front of me!

One adventure, which came near costing me not only my diving-bell but my life, happened to me off the Lower California Coast, at a particularly wild part of that lonely shore line. I had traveled in a motor truck, hauling the diving-bell with me, down southward from San Diego, California, to a point below the marvelously beautiful bay of Ensenada de Todos Santos. Two rather intelligent Mexican boys were with me, serving as mozos.

Establishing our camp on a high mesa ending in cliffs that dropped some thirty feet into the sea, we rigged and anchored a windlass a short distance back and the boys lowered me down and under the water to a depth of about seventy-five feet below the surface, where a wide ledge ran out from the base of the cliffs for a distance of some eighteen or twenty feet before it dropped off into great depths. Just how deep the ocean was there I came very near finding out through personal experience. 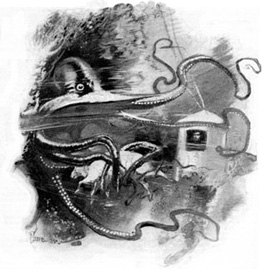 When my diving-bell “studio” had come to rest on this ledge, I signaled to have it swung round until one window faced the cliff and the other two looked to right and left along its base. I got the mozos to swing my “studio” well out on the ledge, so that the seaward side of the diving-bell was not more than two or three feet from the rim of the rock. Thus I had a good view for a considerable distance up the cliff and along its base in both directions.

My curiosity should have been aroused by the fact that there was little or no seaweed growing round the edge of the lower cavern, but for some reason I overlooked this fact, and sat calmly down to my work, with no thought but to record on canvas the beauties of this bit of submarine scenery.

I had been painting for perhaps half an hour when the light from my window became first dim and then vanished altogether. I looked up in surprise—to see what appeared to be a row of huge sea-anemones, each five or six inches across, stuck close to the glass, completely shutting out all light. Fortunately, the illumination through the other two windows enabled me to see plainly—enough to determine that these apparent “anemones” were in reality the “suckers” on one of the tentacles of a huge octopus which was now wrapping itself not only along one side but completely around my diving bell! I could see the horrible-looking “suckers” tightening against the glass, and had hardly recovered from my surprise when the light of the window on my right was blotted out by a similar mass…

Tilden Daken tried his hand at the storyteller’s art, true accounts of his escapades—one about his two month trek in the High Sierra and another about his adventures beneath the sea in his custom-built diving bell.