The Signature Styles of Tilden Daken

Born Samuel Tilden Daken, the artist never signed a painting with the name Samuel. The common reference to the name Sidney is incorrect (his second daughter was named Sydney).

For reasons unclear, he changed the spelling of his surname from Daken to Dakin in about 1920.

The progression of his name iterations and signature styles is helpful in determining the ages of his undated works (he signed more than 90%). 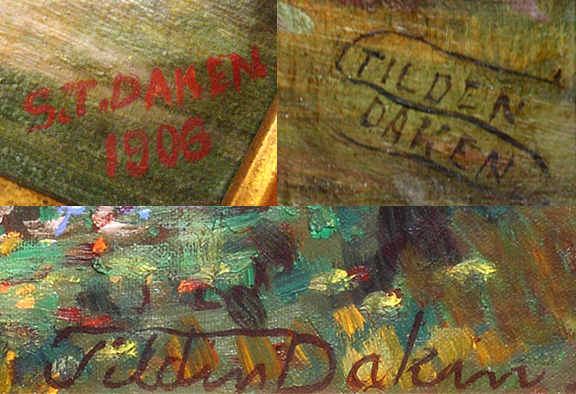 Tilden Dakin — Signature from about 1920 until his death in 1935 (“Daken” versus “Dakin” is sometimes indistinguishable).

Tilden Daken (1876-1935), a decorator and fresco painter in his youth, is best known as a California Impressionist. He painted over 4,000 landscapes en plein air, directly from nature to capture the light of the day from dawn until dusk. He also painted in the Pacific Northwest, Alaska, Mexico, Baja, Hawaii, the South Seas, and parts of the East Coast.